Is the climate crisis being exacerbated by a bureaucratic crisis? 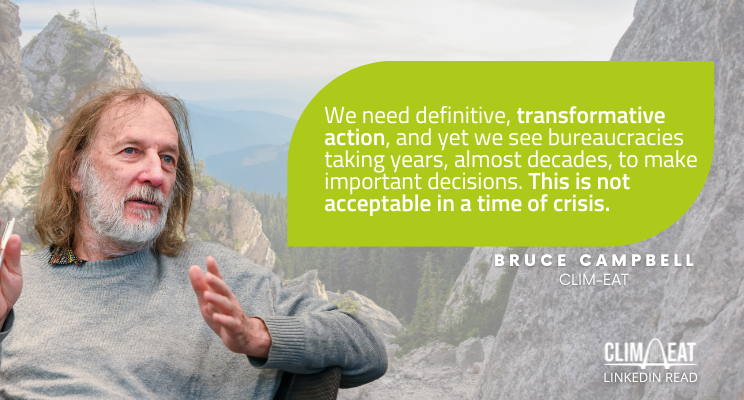 We definitely have a climate crisis.

And in terms of tackling it, we’ve become used to the phrase ‘progressing at a glacial pace’. But that seems to be no longer valid, given the speed with which the glaciers are disappearing!

So, let’s use “snail’s pace”. Bureaucracies are moving at snail’s pace – completely out of sync with global needs at a time of climate crisis. We need definitive, transformative action, and yet we see bureaucracies taking years, almost decades, to make important decisions.

This is not acceptable in a time of crisis.

At an event at the COP27 climate change summit in Egypt last month, Morten Rasmussen, Vice-President at biotechnology company Novozymes, berated the EU’s regulatory bottlenecks. These have led to lengthy approval processes for novel biotech products designed to combat the climate and food crisis.

Many have written about the need for regulatory reform in Europe.[1] [2] Approval of novel plants has taken up to 15 years.[3] The EU has a specific regulation on novel foods – for insect-based foods their safe consumption for longer than 25 years in third countries can lead to regulatory approval.[4] But a quarter of a century to approve use of a food that has been safely consumed for millennia – and consumed by 2 billion people daily – is far too long.

Once again, it’s an example of bureaucracy being out of sync with need. There is no doubt that the European Commission is a complex organisation dealing with new and complex topics, but it is always feasible to simplify decision making processes and regulations – especially at a time of crisis.

Meanwhile, in the area of climate finance – vital for supporting developing countries to confront and respond to climate change – preparation, approval and disbursement of money can be closer to ten years.[5] For the Green Climate Fund – part of the UNFCCC funding mechanism for climate change adaption to and mitigation – one year of preparation of a funding proposal is not uncommon. From submission of a funding proposal to approval has been known to take 1700 days, while the time from approval to disbursement is also long. One organization reported having to upload 188 documents to get accreditation for funding.[6]

These kinds of delays, followed by demands for rapid turnaround of information by officials in the pipeline, are also a source of frustration for those keen to take action on climate change. We should remember that public money is at the heart of international processes and funds many organisations in the climate change space. We should call them out if we feel they are not delivering enough, or on time.

Next, let’s look at the UNFCCC negotiations on agriculture. These are critical for recognizing the role of food production as both a contributor to climate change and a source of solutions. The first draft text on the issue – calling for a work program – was being circulated at COP15 in Copenhagen in 2009, but it did not go beyond draft form due to the collapse of these negotiations. [7] In 2011, at COP17, the COP Presidency pushed through a decision on agriculture, mandating a UNFCCC subsidiary body (SBSTA) “to consider issues related to [it]…with the aim of exchanging views and the COP adopting a decision on this matter” at COP18 the following year.

This decision did not materialize, but in 2014 SBSTA agreed to conduct four technical workshops on agriculture. It took until 2017 at COP 23 to get a decision, resulting in the Koronivia Joint Work on Agriculture (KJWA), which recognized the unique potential of agriculture in tackling climate change. That work was concluded in 2022, marked by some underwhelming text delivered to COP27. For example, the KJWA “[r]ecognized that socioeconomic and food security dimensions are critical when dealing with climate change in agriculture and food systems.”

You’ll forgive me for my slow applause: That text could have been written in the 1990s. It makes me wonder whether the COP negotiations are useful or actually a distraction from getting action on the ground.

Similarly, research organizations are critical to tackling the climate crisis, but these can also be bureaucratic and slow to change. For example, CGIAR – crucially important for building climate-resilient and low emissions agriculture – started “considering institutional structures and arrangements” in 2019, with a view to self-reform.[8]

In 2022, the change management process is still ongoing as indicated by the summary of the Chair of the CGIAR System Council: “I hope this will move us beyond mere incremental conversations, remove roadblocks, stimulate new funding, and deliver results.” [9] While we have to acknowledge that institutions are complex and involved in difficult change processes, the climate crisis isn’t going to wait for institutions to catch up. Change simply has to be faster.

Ultimately, we can’t afford a bureaucratic crisis in the time of a climate crisis. We need action on the ground. We need quick decisions and implementation for what I believe is the greatest existential threat to humankind. Or is it the informal processes and bottom-up networks we will have to, or be forced to, turn to in order to get action: Informal networks, platforms of the willing, social movements, inspirational local leaders or forward-looking private sector CEOs?

No, we can also reform bureaucracies and their processes to be in tune with the times.

Clim-Eat
Previous Post
Disruptive Seeds: challenging the status quo
Next Post
Searching for impact at the COPs: Reflections on the Rio Trio in 2022

Clim-Eat will use the information you provide on this form to send you news and invitations to events. Check the box below to confirm that you agree to contact you by email:

We use Mailchimp as our marketing platform. By clicking below to subscribe, you acknowledge that your information will be transferred to Mailchimp for processing. Learn more about Mailchimp's privacy practices on their website.

You can change your mind at any time by clicking on the unsubscribe link in the footer of any email you receive from us. We will treat your information with respect. By ticking the box, you agree that we may process your information in accordance with these terms.

We use Mailchimp as our marketing platform. By clicking below to subscribe, you acknowledge that your information will be transferred to Mailchimp for processing. Learn more about Mailchimp's privacy practices here.

Use the form below to contact Clim-Eat staff, and we will respond as quickly as possible!