Urban agriculture: Living up to the promise while recognising the limits 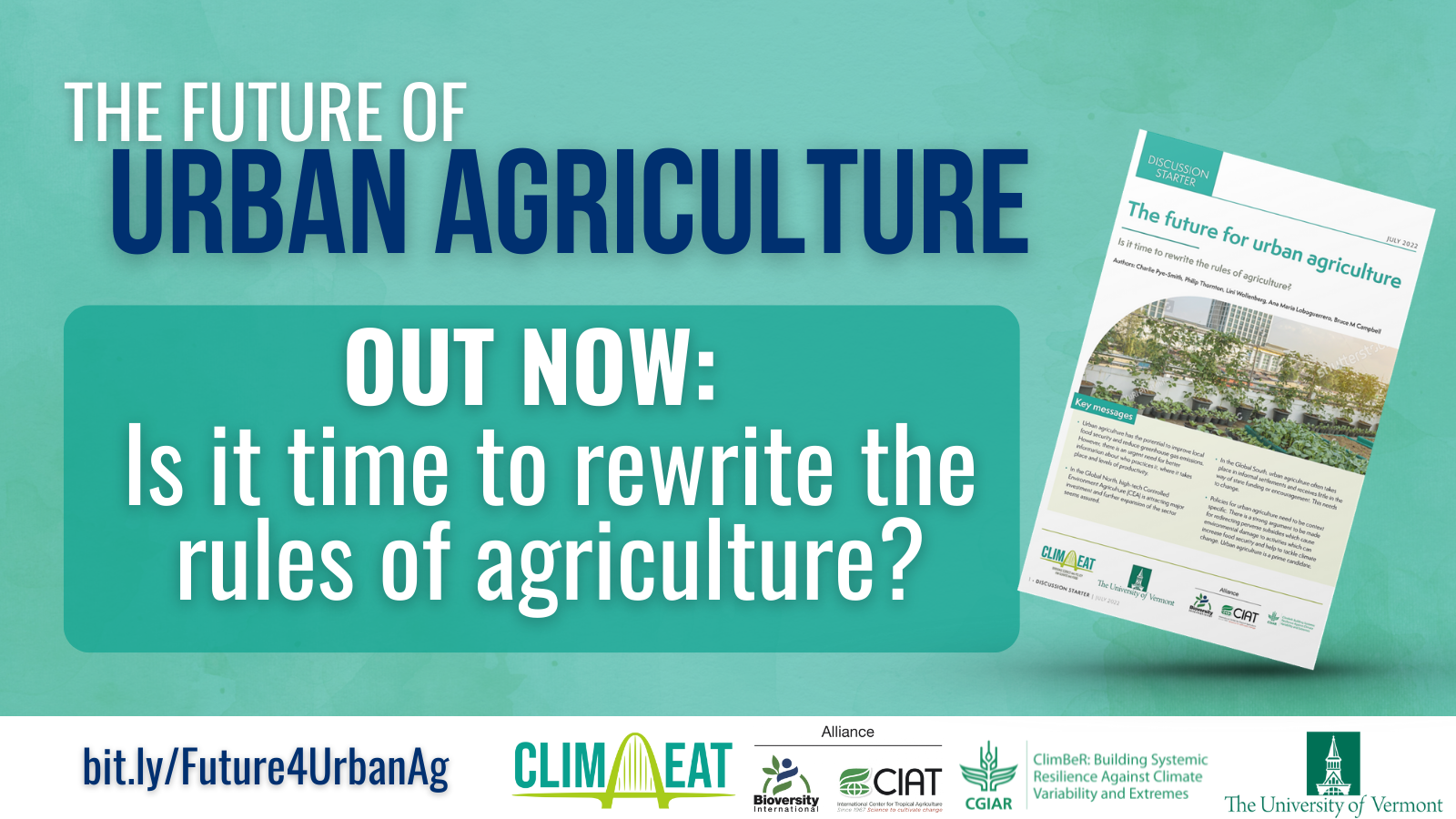 Whether it’s rocket on rooftops or basil in bomb shelters, urban agriculture is booming.

That’s probably a good thing, given that the UN estimates 70% of the world will live in urban areas by 2050.

But the promise of urban agriculture for boosting food security and reducing greenhouse gas emissions from farming is likely to be highly context-specific and policies to support the right kinds of investments will be key.

That’s according to a new Urban Agriculture Discussion Starter, jointly produced by Clim-Eat, the Alliance of Bioversity International and CIAT, and the Gund Institute for Environment of the University of Vermont. It’s the first in a series on hot topics relating to the future of the food system published by Clim-Eat, the Netherlands-based “think-and-do tank”.

“But the story is complex and policymakers need to be aware that in some contexts urban agriculture might actually add to the climate change burden.”

One of the most striking figures in the report relates to the need for an estimated 2.1 billion acres of additional land – an area the size of Brazil – to cope with the increased demand for food in the coming years.

“For me, this means urban agriculture is more than just an opportunity; it is a necessity,” says Dinesh.

The Discussion Starter outlines where the for urban agriculture challenges lie, aiming to support informed decisions and smarter investments that can benefit both people and planet. It covers critical analysis of a range of urban agriculture approaches, from high-tech interventions like hydroponics, to more small-scale, traditional-style farming methods.

To help guide policymaking, the authors also make an urgent call for better information about urban agriculture. This includes the need for data on who is practicing it and where, and its contribution to food security and reducing the carbon footprint of food production.

The report will be officially published today, to coincide with the consultation on the sustainable cities initiative of the Government of Egypt, as part of its COP27 Presidency.

Further Clim-Eat Discussion Starters under consideration for 2022 include those on Youth and Agroecology; Carbon Farming; and Key Research Priorities for Adaptation in Agriculture.

For more information or to speak to the authors, please contact Leanne Zeppenfeldt [leanne@clim-eat.org]

Clim-Eat will use the information you provide on this form to send you news and invitations to events. Check the box below to confirm that you agree to contact you by email:

We use Mailchimp as our marketing platform. By clicking below to subscribe, you acknowledge that your information will be transferred to Mailchimp for processing. Learn more about Mailchimp's privacy practices on their website.

You can change your mind at any time by clicking on the unsubscribe link in the footer of any email you receive from us. We will treat your information with respect. By ticking the box, you agree that we may process your information in accordance with these terms.

We use Mailchimp as our marketing platform. By clicking below to subscribe, you acknowledge that your information will be transferred to Mailchimp for processing. Learn more about Mailchimp's privacy practices here.

Use the form below to contact Clim-Eat staff, and we will respond as quickly as possible!